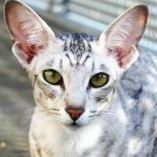 Four cats to Brisbane: am I mad to even consider it?