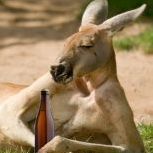 Is anyone else concerned about the Australian economy?